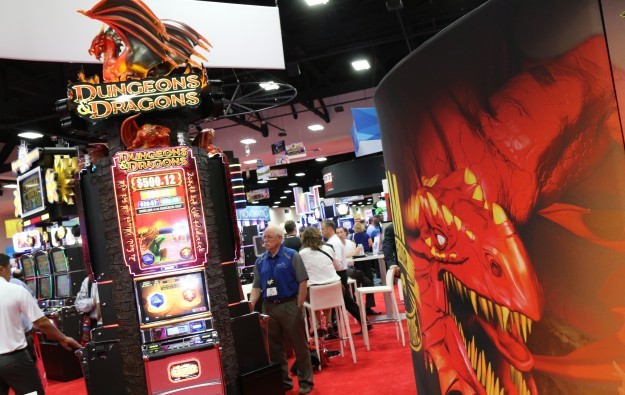 Dungeons and Dragons has been an inspirational tabletop game for decades. The worldwide popularity of this fantasy game from E. Gary Gygax and David Arneson has allowed the game to branch out to other genres including popular video games, board games and arcade machines. Now, Dungeons and Dragons has inspired a whole new type of game: slot machines.

Konami Holdings Corporation, the company that makes amazing games for consoles has now released two slot machines themed to Dungeons and Dragons entitled, ‘Conquest and Treasures’ and ‘Enchanted Riches’. While many Hasbro board games have been used as the inspiration for slot machines in the past, this is the first time that a tabletop role-playing game has been used as a theme for slot machines.

“The players we see this day and age are out looking for entertainment, and there’s a lot of entertainment value in the new Dungeons & Dragons slot machines,” said Randy Reedy, Vice President of slot operations for Casino Valley View. “They really enjoy the experience. Just watching them, they get excited about additional bonuses within the free spin feature, which takes them to the progressive functionality. It’s very fun and interactive.”

Creating a slot machine that uses TV show icons such as characters from Star Trek, comic book heroes, and video game titles as themes has been an ongoing trend with both brick-and-mortar casinos and online gaming providers. Even cutesy themes are being used to attract players that have a taste for all things fluffy and pink, which is evident with titles such as Spin Genie’s uber popular, ‘Fluffy Favourites’. Konami hopes that their ‘Conquest and Treasures’ and ‘Enchanted Riches’ will not only engage fans of the tabletop game who are old enough to play in casinos but also patrons who appreciate groundbreaking graphics and animation.

Leo Smith has been an avid gamer since he was a child. A huge fan of Dungeons and Dragons, he also enjoys The Sims and Command and Conquer, among other titles.