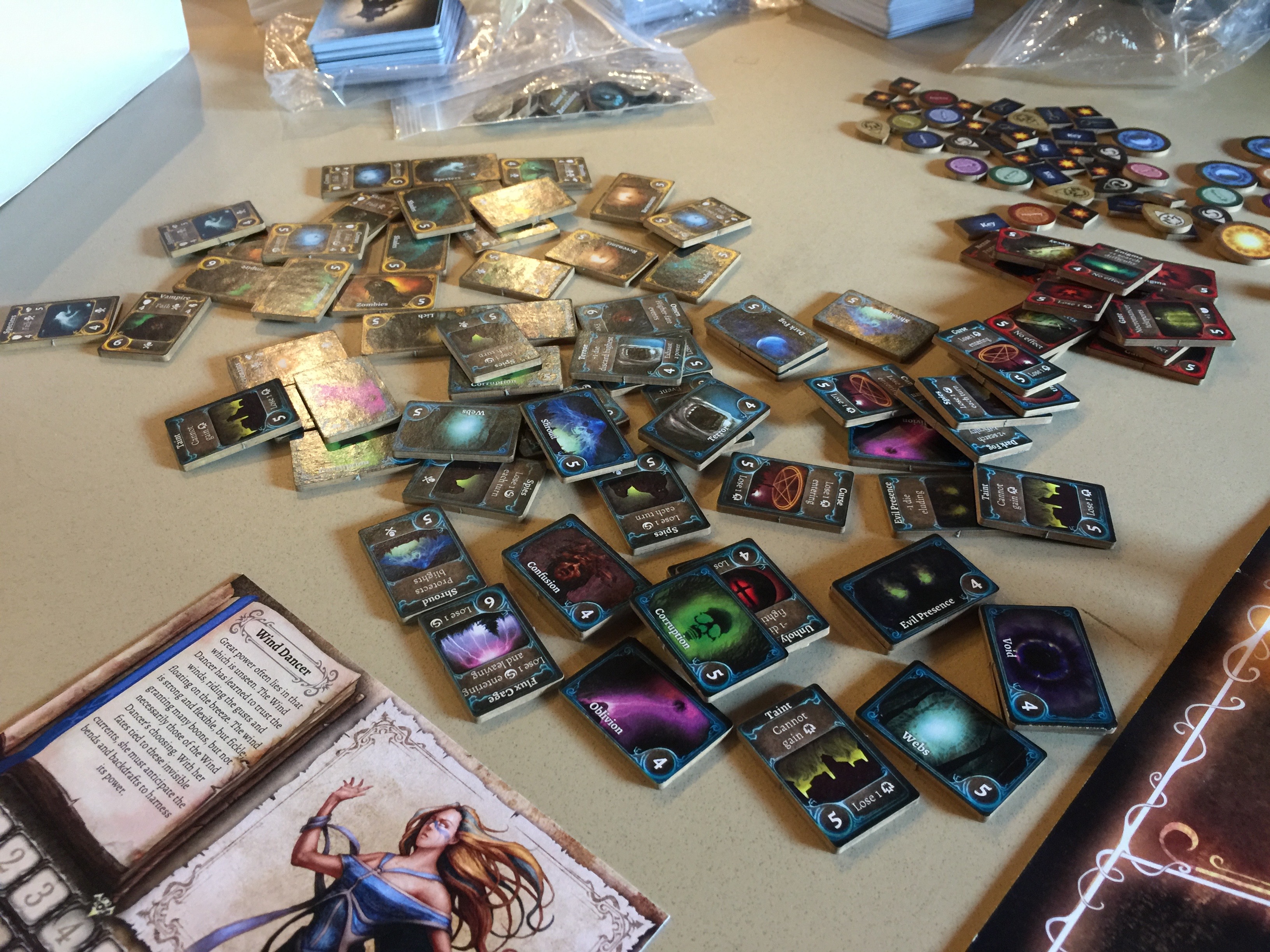 As a fan of cooperative games, I’ve been interested to try Victory Point Games’ Darkest Night for a while. The sub-genre is one of my favorites and I find it hard to believe it’s almost a decade on since Pandemic made its splash onto the board game scene and inspired the hobby to get on the cooperative game train. Sure, it had predecessors but Matt Leacock’s tightly-designed end-of-the-world wonder introduced a larger audience to the sub-genre and we’ve had a lot of great ones and many not-so-great ones since then.

DN‘s publisher is run by Alan Emrich. Alan is a genuine hero for Southern California gamers, as one of the guys responsible for the Strategicon series of conventions while making many other contributions to the hobby even before he launched VPG. I was glad to hear they were doing a new edition of the game with updated rules, gorgeous new miniatures and stretch goals-a-go-go. Having recently gotten interested in the design work of local designer Jeremy Lennert anyway (his Hunt: The Unknown Quarry was recently brought into digital form thanks also to a Kickstarter campaign), I thought it was finally the chance to give it a go. Jeremy was kind enough to explain the game for me and ‘referee’ a play of the title at a recent game event, which I partially Periscoped while we got the rules explanation if you’re inclined to give it a look.

Darkest Night is a fantasy-themed cooperative game but it’s no Pandemic clone (that’s Defenders of the Realm). Instead, Darkest Night draws more from the feel of adventure-oriented co-ops that give players more of a chance to develop their character (think Runebound or Return of the Heroes). This is welcome because one of the problems with co-ops is the tendency for one player to kind of take over everyone’s roles (“The Director,” they are often politely called). Darkest Night gives players an opportunity to develop themselves out with powers from their own deck of 10 cards (13, if stretch goals happen). I’m also in love with the statistic the characters have. No typical “Strength” and “Dexterity” stuff here. Instead, you have “Grace” (hit points) and “Secrecy” (how hard you are to find). The way Secrecy works is intriguing since this value will govern how easy it is for the Necromancer to find you. Kind of like Fearsome Floors, he’ll move to the closest player he detects when he moves.

The new edition has gorgeous miniatures that you can buy as an add-on plus some expanded rules. While this was my first play of the game and I cannot compare the new rules to the old, it would appear the updates expand the options available and make the game even more flexible. As with many games, it’s the cards that bring the variation to life. The new edition adds even more event cards, which are drawn from most locations. These cards can lead to conflicts, bad mojo stuff happening that will provide you misery and, occasionally, something not terrible. While the different cards are welcome, they do feel very 80’s Games Workshop, as they usually have a die roll to see what happens. I’m of two minds on that one. While the additional variation of cards not always doing the same thing can be enjoyable, there are times when you get results like “nothing happens.” Kind of a yawn but okay if it happens rarely. In our game, it happened more than that.

The Event cards also trigger some interesting elements to add to the board, including Quests. These are opportunities for characters to complete a task to gain an advantage but they also come with timers. The urgency and interest these provide make for a richer game and it’s a welcome mechanism. There are also Artifacts and Mystery cards that provide some other opportunities for interaction with game mechanisms that help players along. We played on a prototype board so it is hard to judge it but there are a lot of things that can show up on the board and it can get a bit crowded, but all of these elements work well for the game.

Then the bad guy gets a turn (notably, after all players get a go – not like Pandemic where it happens after each player). Blights (or the ‘infection cubes’, if you like) that get dropped out onto the board are implemented in an interesting way as they turn regions of the board into startlingly difficult places to be. Instead of just stacking up to show their threat as in Pandemic, Blights provide a specific penalty to the players at the location where they sprout. They’ll hit you for a combat or evading penalty or some other problem. Blights works well – in fact, my only issue with the Blights is the design of the tiles. While you are usually defending against or evading them, those values are quite small. Near the bottom, in a MUCH bigger font is the value you need to roll to defeat them (and the penalty for failure), but this is less often used. Were I their graphic designer, I’d switch those immediately to increase the ease of use because we kept having to squint to complete the action we did the most with these guys.