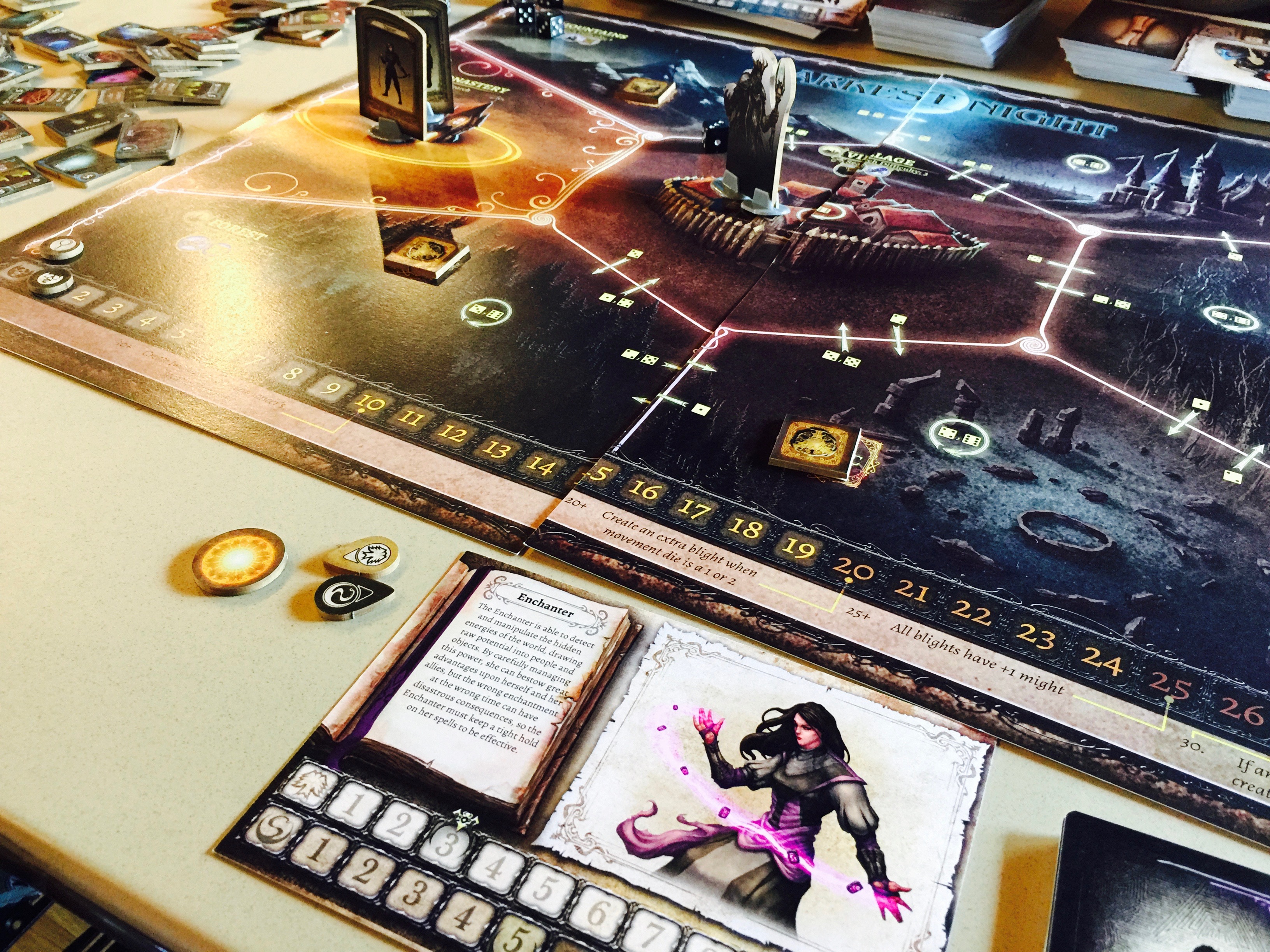 (continued from the first page)

While Blight works well, I do wish I could see the effort help us manage the threats. While removing them reduces frustration, I had a hard time tracking how our efforts were helping in the battle against the Necromancer. Once in a while, something we did reduce the ‘Darkness’ (a marker not unlike the Knizia Lord of the Rings tracker, or the Minion Hunter –  the precursor to all of these games – track that all four threats live on), which felt like we were striking a blow. Too often, though, our efforts felt like they were just us swatting flies away from our efforts to get enough artifacts to get enough clues to do…something. While the turns were short, a lot of times, it just felt like we weren’t doing very much and yet turns have a lot going on from an administrative perspective. You start with that event card, which can often turn into multiple event cards. Then you do your action: moving (again, a whole turn to travel makes sense in the name of the mechanisms but not in the name of players feeling a sense of accomplishment), taking a single swipe at a Blight (miss the roll and the turn is over, bub, which could mean another event or just lost Grace), or do something with one of the cards on the space. You can also just rest to restore Grace. Then, you need to deal with any monster Blights (either fight them off – notably, not killing them – or just evade them). 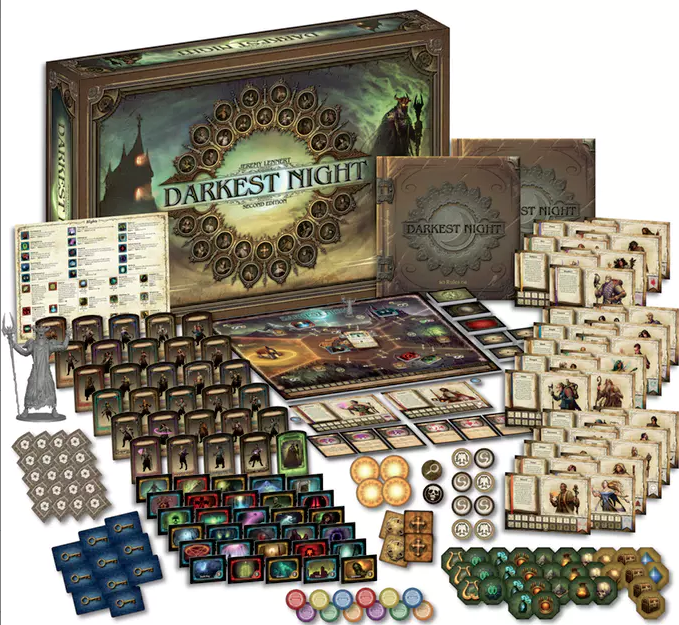 There are just an awful lot of turns. The length of a turn is a challenging problem. As a eurogamer, I’m no fan of lost turns. While the Web (a Blight that makes a player lose a turn when they leave a space with it) is manageable because you can opt to fight and remove Blights, it is less appealing to go to the Monastery and pray, only to find that you get absolutely nothing for it with bad rolls. I won’t make a religious joke here but I will say that I’d rather see the devotion do you good regardless of the dice. Darkest Night has that war-game sense of resolutional luck rather than situational luck. I’m sure that’s a lot of the appeal for RPG players and the huge community of fans the game enjoys (which has led to many expansions).

Unfortunately, the storytelling is not as strong as the interesting mechanisms. The names are all generic and the board is made up of a handful of locations that have functional names “Monastery” and “Swamp,” that are descriptive but not evocative. While the Necromancer is a threat somehow, it’s not something that comes out in the game much. In Pandemic, you’re saving the world (real places with city names) from the disease and the paths to a loss make it clear what is happening. This is even more powerful and effective in the truly awesome Pandemic Legacy. In Knizia’s Lord of the Rings, Knizia benefits from the legendarily intriguing Middle Earth, which is abstracted out but there is a definite sense of location with the unique characteristics of the areas.

It’s an interesting problem. Is it more appealing to let players imagine their own names with the characters to tell their own story? Sure, I buy that idea. The 29 characters and their unique 13 card decks provide players with a chance to experience the game many different ways, adding to the replay value of the game. Yet, I can’t say the same for those generic name for the locations on the board. There’s nothing particularly inspiring about going to The Forest or The Castle. That’s where the storytelling would be welcome. Even the Necromancer seems to want a name to make him seem more grounded and real. As a double-size cardboard standee, he looks imposing but without a backstory or more visible signs of the impending doom, Darkest Night’s story didn’t hold my attention for the full length of the game, even though the mechanisms are strong.

Darkest Night plays in two to three hours but it was a first game for our crew so it ran longer. I think my recent forays into three-hour games of Star Wars: Rebellion may have given me a false sense of my stamina for over two-hour games. I believe the storytelling strength of Star Wars: Rebellion is why three hours with that game feels like not enough time. Of course, familiarity with almost, ahem, forty years of Star Wars in my life means there is a built-in level of interest there. Still, I think the rich theming is what makes it all the more compelling and keeps players deeply engaged.

Darkest Night 2nd Edition is good fun for RPG cooperative board gamers and is available now on Kickstarter. It’s already funded but a bunch of excellent stretch goals await. I recommend you check it out because if you like this kind of game, you get a whole lot of fun in this new edition. The campaign runs through June 11 and the details can be found here.