Session Review: Fisticuffs by The Nerdologues 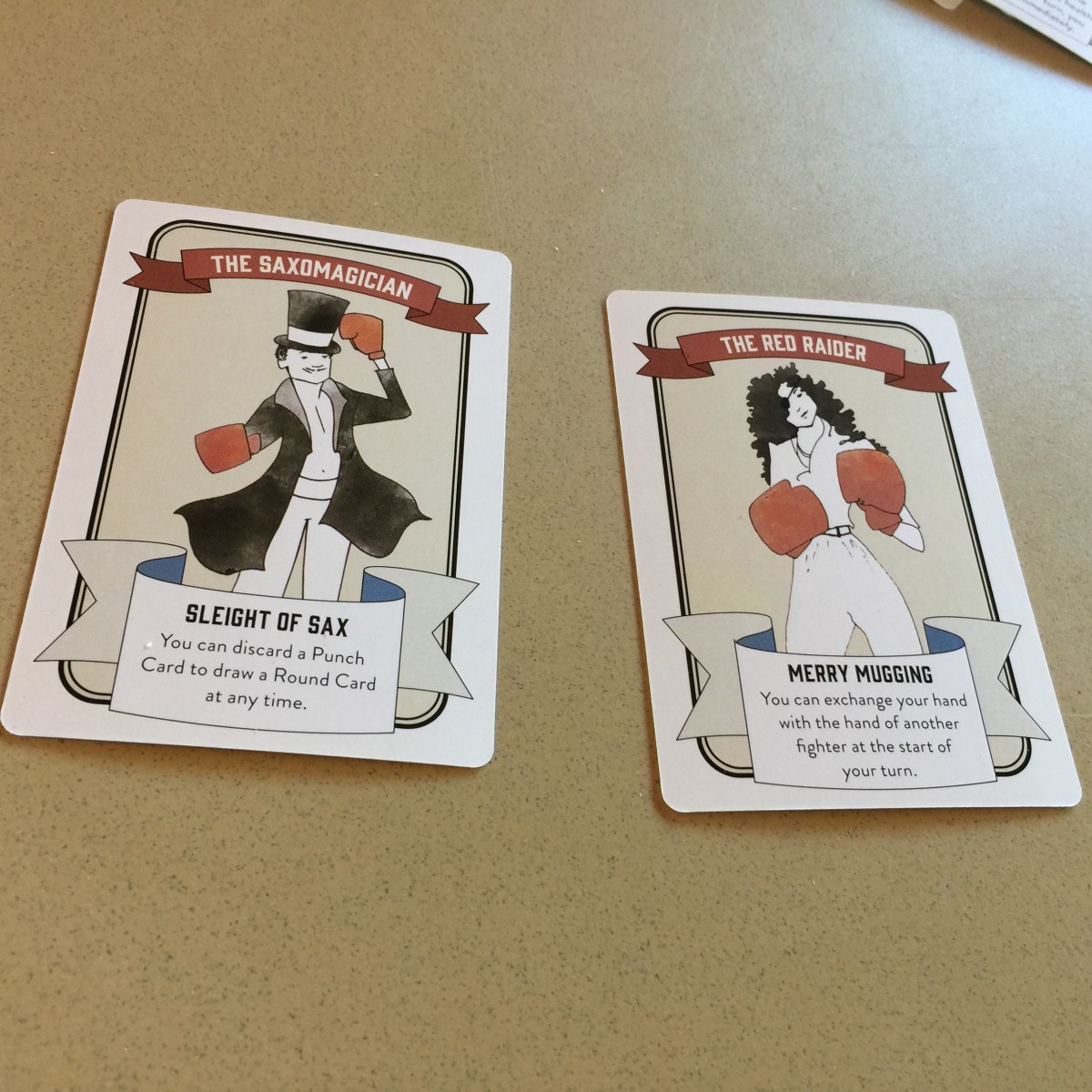 Session Review: Fisticuffs by The Nerdologues

Fisticuffs was a successful Kickstarter from a parallel universe to the one where gamer boardgames exist. Like Cards Against Humanity or The Oatmeal’s Exploding Kittens game, these titles are a lot about the humor and creativity of the individuals involved – sometimes at the expense of game play. While apologists will defend the titles as ‘a fun experience’ and ‘crowd-dependent,’ serious gamers just need to know what they’re getting themselves into.

I approached Fisticuffs with that thought in mind, especially since the game ‘sold’ me on the designers being ‘a bunch of people you don’t know but could totally be friends with.’ That’s good marketing and I admire it.

I also love party games and I’m fine with including lighter games that sometimes include a take-that feel as part of a day of gaming. Heck, I played Red Dragon Inn more times last year than any Feld game except Die Burgen Von Burgund (the booze helps).

Fisticuffs is one such game, playing with 4 to 6 players in just 20 or so minutes. The idea of the game is like Brawl, TKO and JAB before it – let players essentially duke it out over a few rounds 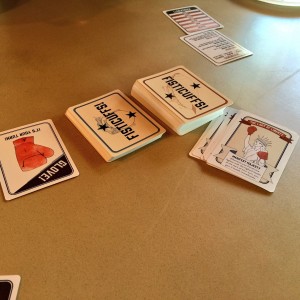 until you can declare a winner. While the Brawl and JAB do the realtime thing (which some find overwhelming), Fisticuffs plays like a normal card game but allows people to join in the fray even when it’s not their turn.

The rules are simple. Players choose a character, all of whom have funny names but some of whom have special powers you’ll never use. Players get cards of different colors with various punches and attacks on them. On your turn, you play a card to attack someone. They can block it with the same named card (e.g., an Uppercut blocks an Uppercut). If you don’t block, other players can. If a block happens, a card of the same color can be used to counter-attack. And so on, but now you can target any other players who got involved. Yes, everyone at the table can potentially join in. Yes, it gets a bit confusing – which is part of the fun? When a blow finally goes unblocked, the person hit loses some of their twelve starts hit points. Then, the same thing happens next turn.

Once everyone gets a turn, you can reload cards and you get some defensive cards from a secondary deck. These “Round” cards (not round like BB-8 – you get one each round) have more ’tactical’ options. This all continues until you’re down to two players and then the rules simplify further. Someone wins, it’s over.

Needless to say that despite the mild amusement from the humor (primarily from the character cards), our players didn’t find much to engage them in Fisticuffs. After the first turn, people were more conservative with getting involved in brawls. The artwork is basic but not so much so that we thought it was being intentionally bad for comic effect. The simplicity likely helped keep costs down for the Kickstarter and that makes sense.

I’m glad the Nerdologues got the backing to make their game a reality because I love crowdsourcing to help creative projects. I hope the 600 or so folks who backed it have a great time with Fisticuffs. But it’s just not for me. While Brawl is the be-all, end-all fighting card game, TKO gets you the theme for less money (Brawl costs per deck, TKO is ludicrously cheap) with a limit of two players. If you love the theme, Fisticuffs does get this experience with a multiplayer option and the funny back story (which you can enjoy in the video above) is worth a look.

This copy of Fisticuffs will be donated to the Strategicon Game Library so you can give it a try at Gamex 2016 (and beyond) to see if it’s more to your taste than mine.