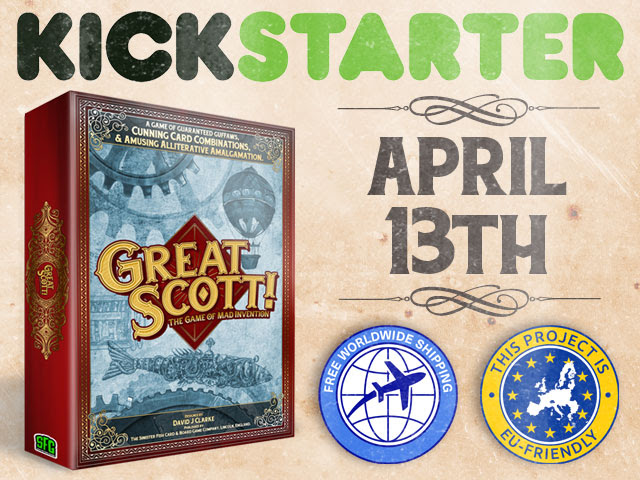 After over a year of design, development, and playtesting, Great Scott! – The Game of Mad Invention is ready to be unleashed! Gamers who enjoy the card drafting and scoring mechanics of games like 7 Wonders, and the humorous storytelling of Snake Oil will find endless opportunities for fun and strategy in this Victorian themed inventing game.

Great Scott! launches on Kickstarter on April 13th with a price point of £16 (approximately $23 / €21) which includes worldwide shipping, and an EU Friendly option.

The game has been a hit with playtesters and reviewers alike, with the overwhelming opinion expressed that the game is just plain FUN! Which is what we’re all here for, right?

With 180 cards featuring clean, clear graphic design, and 60 period illustrations provided by the British Library, Great Scott! looks as good as it plays.

Queen Victoria has summoned inventors from all over the Empire to compete in a grand contest to decide who will earn the title of Royal Inventor.

Players take on the roles of the inventors, and construct ridiculous contraptions using asset and concept cards. After 5 rounds of drafting, taking around 3-5 minutes, each player then explains their invention to the other players, who must award hidden commendation points to their favorites.

Inventions are scored for their base value plus bonuses for combining the various card types. In an innovative twist, bonus points are also awarded for alliteration, making inventions such as the “Diabolical Dynamite Deployed Donkey Deterrent” an extremely high scoring creation! The winner is the player with the most points after 3 rounds.

Nearly a billion possible inventions, for Her Majesty, and for science!

Number of players: 3–5 (more if fewer rounds are played)