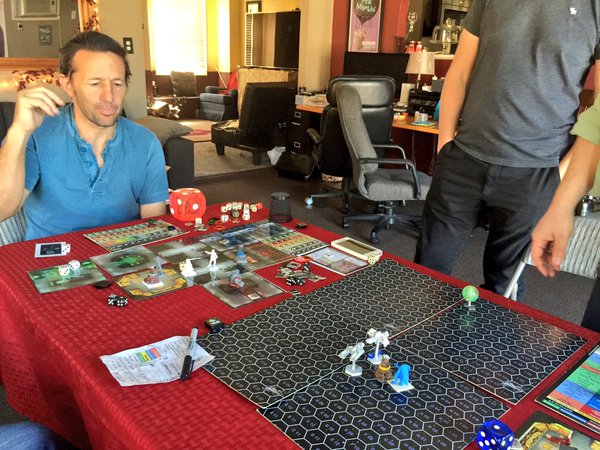 Jeff Siadek has been a local hero game designer for a long time here in Los Angeles. Listeners of the podcast may recall he’s joined me on the show before when he was the Guest of Honor at a past Strategicon but I’ve known Jeff for decades. He’s a good guy that I always enjoy visiting with when I go to Strategicons thrice a year.

Yet, somehow, I hadn’t played one of his most popular and beloved games, Battlestations, despite knowing there was a huge community of players that loved the game. Gobs of online scenarios exist for the game and there’s a forum with a strong, involved bunch of gamers who have been loving this game for the last twelve years.

Now, in fairness, I’m not the kind of guy who normally goes in for the RPG/Ameritrash style of play. The game is not just about spaceships, chock full of rules and various scenarios, but it also has character creation like an RPG where you keep the same persona game to game. Not exactly my cup of tea. That is, until fairly recently, when I started to play more thematic games to get my teenage son more deeply into the hobby (which has worked!). Those who follow me on Twitter and Facebook the last couple of years may have been surprised to see games like Mice & Mystics, X-Wing and Imperial Assault show up in the feeds. More on that in the future (yes, a book is on the way).

The opportunity for me to try Battlestations! finally came up because of a new Second Edition that is now available on Kickstarter. A fan of the game (and another local designer friend), Joey Vigour, helped Jeff produce this new version of the game and bring it to the crowdfunding site. Despite the longer-than-usual-for-Eric play time and the style of play, I wanted to give it a go since I’d be asked to record a podcast to talk about it (and I like talking to these guys). Besides, my horizons have opened up on this style of game more in recent days. They say getting out of your comfort zone is how to really experience life and I don’t think that concept is limited to business, travel and dining.

For those who don’t know, Battlestations! is a space combat game that plays at two levels – both in space as a ship-to-ship combat game and it includes play within the ship as the Captain and crew interact during the battle. One of the aspects of the game that has made it so popular is this two-level approach to this kind of game. While some have marveled at the spaceship command experience delivered by the electronic game Artemis, I’m a bit more excited by simulations that are not purely digital.

So, how does Battlestations! play for those with a eurogamer soul? I’m not going to lie; the game has a large rulebook with exceptions and rules-a-go-go. However, Jeff and Joey have introduced a new quick-start rulebook that can get you playing much quicker than in the past. With that 30ish-page rulebook, you have what you need to play. The 200 page rule and scenario book that comes with it then becomes more of a reference guide for additional weapons, equipment and adventure variants.

Battlestations! starts with some prep work and someone being the GM/Overlord. You create characters with races and abilities to begin. In our scenario, we were given some pre-created characters that were marines, scientists, pilots, etc. We then populated a modular ship board with our characters. The usual spaceship rooms were present – a small bridge, engine rooms, weapons and science centers to be manned by our characters and some freebooter guys. On the other outer space map, you pilot the ship in contact with other ships, planets and such. Jeff (our GM) also had an enemy ship we were supposed to chase off, destroy or capture, which was also built out completely with modules and bad guys roaming around.

Gameplay itself is pretty straightforward for this kind of game. You can move and act (including attacks) each turn, then the enemies try to thwart you. Weapons, equipment and character have various abilities to help them shoot the bad guys, pilot ships, and perform various feats. We had the luxury of the game designer there so I mostly didn’t pay too much attention to the rules. Since the game has someone running it like an RPG or an RPG-in-a-box like Descent, most players can do this comfortably since really the GM is the only one who need to be up on the minutia. While I had a grip on what I needed to do turn-to-turn, when I needed a clarification, Jeff provided it.

Combat is a lot of die-rolling of the old style – hit an armor class and do damage that gets through. Lots of skills rolls and such are based on character attributes and players do need to read up on what they can do in order to use their special abilities to their advantage during the game. I frequently forgot about how hardy my alien skin was when battle damage came calling, to my detriment.

In our game, our freebooters ended up being traitors, so we had to dispatch them before we encountered the enemy ship. We did so mostly (my own three-armed alien scientist ended up being a better warrior than my brother-in-law’s Marine) before we launched a boarding missile at the enemy with two of our player characters inside. We proceeded to have a ship-to-ship combat as our guys tried to take over the ship from the inside. Heavy damage from the enemy blasting and then ramming our ship led to our last two characters also

abandoning ship for the other vessel. We joined the carnage and won the day by dispatching the foes at close quarters with our lasers. We almost lost the foolhardy and grenade-happy (yes, grenades in a spaceship are as bad an idea as they sound) Joey but we managed to revive him in time to win the scenario.

I’m glossing over rules a bit and focusing on the story for a simple reason: that’s what matters most. The rules are longer because they need to be so in order to give players the flexibility to have adventures. There are luck tokens to give you the chance to play a little wildly because that’s what you want – Star Wars-style risks and derring-do. Joey understood this much better than the other three players, we bunch of eurogamers trying to optimize our turns. Silly, we were.

The story element is a big deal, though. What I’ve started to get excited about in Ameritrash games is exactly that. The stories you experience and get to tell later tend to be much more fun than a detailed description of the last point-salad you consumed from Chef Feld. We had a great morning of it and the stories will stick. BGB listeners will know that before anything else, I’m a storyteller, so maybe it’s bizarre that I took this long to come to this realization. Whatever. I’m here now and having a great time.

Our group had a blast playing Battlestations and if you’re looking for a game that will give you the sense of the Star Wars (and maybe Star Trek, depending on the scenario) style of ship combat and adventure, this is the game you’re seeking. There are plenty of scenarios for exploring planets and other kinds of encounters, plus solo play options. With the new edition, you also get upgraded components, including marvelous miniatures courtesy of Joey’s expertise in this space. Those who have seen his gorgeous alien figures in his game Chaosmos will love to see Battlestations’ races come to life again in plastic mini form. It’s a wonderful package of extensive gameplay and excellent components.

The game is up on Kickstarter now and already funded, including many stretch goals with additional scenarios from well-known game designers like Richard Garfield (Magic: The Gathering), Jay Little (X-Wing) and Rick Loomis (Mr. Flying Buffalo). I heartily endorse this whiz-bang box full of fun times.