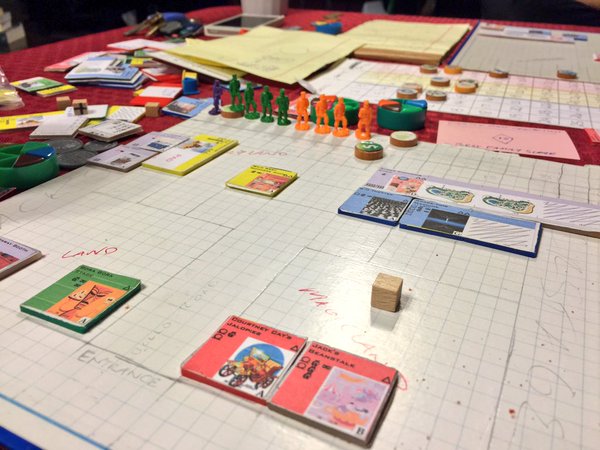 Yes, Boardgame Babylon just got a serious facelift. I really never cared for the last theme. That dark nightmare was implemented for an experiment when I was working for my last job and I had never corrected it. Now it’s fixed and I find this one much cleaner.

That’s not the only theme I’m considering this evening. We had a useful playtesting session with Ta-Te Wu and Chad Smith, my co-conspirators on Theme Park. Chad’s been helping me with the prototype for as long as it’s been in serious development. Ta-Te has playtested the game a number of times and has now come on-board officially to help refine and finish Theme Park. I couldn’t be happier. Ta-Te has made some great suggestions to help streamline the game and added many good ideas. Obviously, we’ve worked on games before so we know how to collaborate.

What’s changing? Well, it’s hard to really explain without going more deeply into the game design and there’s already a solid description on BGG that represents about all we’ll reveal at this point. But I will say that Ta-Te and Chad together (with minimal physical force involved) got me to make a major edit to get the game down to a shorter play time and it now feels like a revelation. Those elements may come back in a future expansion (or maybe the sequel to Theme Park…) but I guess I’m ready to let them go.

In essence, it cuts out a portion of the game where I developed the story further but the players (other than myself and my wife, these guys have played Theme Park the most) are saying they’re already getting a full experience. I’m deeply intrigued by the idea that it was enough of the story. Yet, I recall moments when I’ve seen the same thing happen with much better designers than myself. I watched Reiner Knizia chop out a sizable portion of Strozzi because the game was taking too long. I saw something similar when Michael Schacht was here in L.A. Of course, these modern masters have far greater instincts than I do when it comes to design.

I’m reminded of a great quote from the Walter Isaacson book about Steve Jobs (yes, I’m one of those people who highlighted the heck out of that book. “If you want to live your life in a creative way, as an artist, you have to not look back too much. You have to be willing to take whatever you’ve done and whoever you were and throw them away.” And so I will.

One thought on “Theme Changes and Theme Park”