Sometimes it feels like I’m constantly making excuses about my board game output. That is, both the podcast as well as the actual games I’m designing. The background on that isn’t terribly interesting; I have a busy life with a high-energy career, two teenagers that have busy lives that I participate in, and a big family with some older relatives that need my attention, too. I’m in ‘the squeeze’, when the generation before you and the one after you both require help. It’s also a time when I consider myself lucky enough to have a lot of loving family in my life. But, alas, the podcast and my game projects don’t get enough love sometimes.

About 100 words – that’s all I promised myself I would use for excuses. Now, onward. I’m glad to announce that with this migration to a new host, I will be getting back into podcasting and blogging a bit more. Partly, this has to do with a job change that cuts my commute (yes, I suppose I could have gone back to carcasting, but it never happened) down in a life-altering way.

I’m also excited to get back to podcasting and blogging partly to discuss my design work that is progressing steadily. After years (years!) 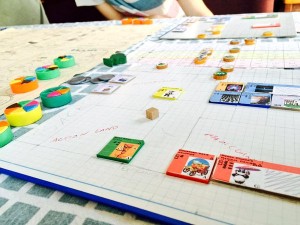 in development, Theme Park has rounded an exciting corner and our internal playtests have been great. While, as Reiner Knizia would say, ‘the first 80% is easy, it’s the last 20% that is hard’, I’d say that the first 80% is probably ridiculously easy for the world’s most experienced game designer but it was rough going for me. We started with a massive, multi-arm monster that has been pared back to fit into the window of time in which I expected it to play (90-120 min). We’ve spent many three hour sessions getting 1/3 of the way through the game with a lot of comments, edits, and changes. But now, we’re moving along well now with games coming in close to the time we expect (the last year, where the game progresses and changes and that has seen the least completed sessions, is still in deep playtest but mostly it’s about balancing individual tiles with edits I want to make. Earlier iterations of the game played with largely generic attractions, shows, restaurants and such in order to get the cost/value elements down. Those seem pretty solid now (pricing is still a concern on which I’m taking feedback) but it gives me some opportunity to reintroduce some ideas I’d stripped out previously (although some have been relegated to the planned sequel to Theme Park).

Of course, Theme Park was occasionally off the front burner due to three other active developments: one is Cosplay Grab, which some of 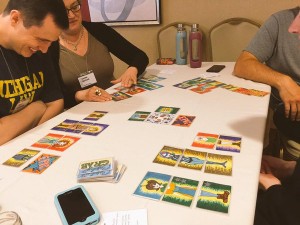 you may have played at the Gathering of Friends, SoCal Playtesting, or Strategicon this last year. We’ve got the game sufficiently refined that it is now possibly looking for a publisher (two publishers are considering it now), although there’s still a minor possibility that it may be Kickstarted (not by me alone but maybe someone else I know and trust). We shall see. The other two are an unnamed game that I’m quietly developing in discussion with one of the top board game publishers around. The last one if a party game shrouded in mystery right now…but one that local SoCal folks will get to play this holiday season if they find me at an event.

Why does this make me want to podcast and blog? Well, partly because I’ve written a fair amount about the process of working on these games and I’d like to chat on-record about it. In the end, we might even do some video (although I still say I have a great face for podcasting). We shall see. All that text will find its way into the book on tabletop gaming I’ve been also quietly writing in the background for the last year or so. I plan to self-publish that but we’ll see because there are a couple of companies that are interested in BGB content being available for their brand to publish on their site. If that happens, the book (which is built to be heavily excerpted for blog posts and social) may be part of the deal so we’ll see how that all pans out.

But, for now, I’m thrilled that we have a new hosting system (which is also being used to build out a few other business ideas) and the games are going well. More blog posts about more interesting stuff is coming…stay tuned.